May God bless and keep you always

That’s my prayer tonight for the one & only Bob Dylan. Young in terms of reinventing yourself, creating new poetic waves and awakening a delicious sensation in the likes of me, when we listen to you.

Falling in love with Dylan is something that happens every time I hear him sing. It did not happen the first time I heard him, though. I was all of 14 when I first heard him sing “Forever Young”. I also heard Joan Baez sing it and fell in love with her voice. Then something compelled me to listen to Dylan again…and again…and again. “Forever Young” is part of his album called “Planet Waves” which also had some other amazing songs “Something There Is About You”, “Tough Mama” & “Never Say Goodbye”. I didn’t want to say goodbye…in fact I wanted to say hello all over again.

The next day saw me in a music shop asking for Bob Dylan cassettes (yes, those were the days of cassettes and LP records). The store owner looked at me as if I didn’t know what I was asking for. He told me there is no singer like that! I argued and he finally gave me the address of another store and said “try there…you will find English music”. I walked into this shop that looked like it needed repairs 50 years ago & approached the old man at the counter who was humming “Country Roads”. He smiled and I asked him”Bob Dylan?”. His reply was “No darling. John Denver” and both of us laughed. “Aren’t you too young for Dylan’s music?” he asked and I said with all the passion of a 14 year old, “I can’t get his songs out of my mind”. In later years when I started dating the love of my life, he actually wooed me with Dylan’s music – “Tangled Up In Blue”, “You’re A Big Girl Now” & “You’re Gonna Make Me Lonesome  When You Go”.

So, began my love affair with Dylan’s poetry, music and writing. I couldn’t get enough of him or Joan Baez for that matter. I would look for every piece of information I could get about them. My brother & I were holidaying in Vietnam with my parents in 1984 and my Dad sat with me to listen to “my kind of music”. I got him to listen to “The Wall” by Pink Floyd first and then “The Times They Are A Changin'” by Dylan. One of my happiest moments was when he said, “Out of all the music I have heard you listen to, over the years, this man sings in a way I can understand”. 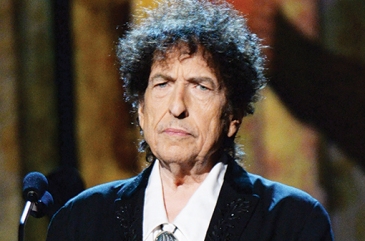 That is actually the power of Dylan’s music. It is something that most people can understand and relate to. Guitar & harmonica, bass, piano & ensemble strings all accompanied the lyrics to create musical poetry. Dylan phrases his writing so perfectly that the meaning is rendered starkly and with profound resonance.

The Nobel Prize for Literature has surely created a buzz among critics & analysts of his career.That Dylan has never conformed to the usual and Dylanologists love that about him. After five decades of “creating new poetic expressions” and not separating the music from the words & voice (you simply can’t), Dylan came up with The Tempest & Shadows In The Night primarily drawn from the great American Songbook. What’s so different, one may ask. Almost every singer from Robbie Williams to Paul McCartney to Carly Simon to Rod Stewart have done it. Just one difference I think will suffice – most singers make albums vaguely attempting to create a blend of their best-loved classic works; Dylan makes albums that bring up a world before Bob Dylan existed – filled with music that sounds like blues, country or just plain rockabilly from an era when pop was still untouched by his influence. That, my dear readers & friends is quintessential Bob Dylan.

He has threaded himself without any obvious knots & cuts, into the complex tapestry of American popular music. He has borrowed from the past, reworked melodies, images, characters and most of all, attitudes. The Dylan I fell in love with mocked the world from behind his grey – blue- black shades by combining  symbolic poetry and the tempo & energy of various music forms. He deserves this Nobel Prize only for that. For just being himself!