Sinking in a seat as the lights dimmed, the lion of MGM roaring in front of me on the silver screen, I was transported to another world all together. If books help me visualise and let my imagination work overtime, I love the movies for the power they have over the mind and heart. Roman Polanski, a director I admire tremendously, once said, “Cinema should make you forget that you are sitting in a theatre”

Having grown up a staple diet of all time classics like Gone With The Wind, Casablanca, Citizen Kane, Sound Of Music, The Good The Bad The Ugly and few more in the same genres, I did not understand the nuances of appreciating a well made film those days. However, you can never escape the influence of a great movie…and that’s what happened to me also!

This sounds like a cliche I know…but they really don’t make them like that anymore!!! When I look at the kind of Hollywood movies released now, I find them revolving around aliens, autobods, vampires, draculas, witches and wizards. Where are normal human beings? One gets a strong feeling that our planet will be taken over by all the above…that’s why we don’t have movies made about normal people like you and me 🙂

I was reading the tribute paid to Eli Wallach who died recently. And I remembered some of the movies I have enjoyed during my teenage years and later too. The genres that I’m a sucker for – romance (that’s easy to guess), suspense thrillers (Hitchcock variety), westerns (gun slinging, crooked cigars/cigarettes in the mouth), war movies (they always bring in nostalgia, poignancy and a smile). You know something…I still enjoy watching them again now…every once in a while, on a rainy afternoon, with a nice cuppa and some popcorn…I’m willing to be transported to the world of Scarlett O’Hara, Capt & Maria Von Trapp, Eliza Do Little & Prof Higgins and the ever lovely Mrs Campbell. So, who are all these characters? It would make sense to write about some of my all time favourites…

This remains my numero uno as far as romantic movies are concerned. I can swoon every time I hear Humphrey Bogart say, “Of all the gin joints in the world, she had to walk into mine.” With nearly every line of its script engraved on the collective subconscious, and its central performances of Bogart and Ingrid Bergman defining iconic cool, Casablanca is an exultant classic. “Here’s looking at you, kid”.

I love a good war movie, especially the Second World War ones. This 1963 American film on the escape and escape attempts of Allied forces prisoners from a German military camp is the right audio visual choice that tickled my palate with intriguing drama and meticulous war and war camp description. The movie has a a classic motorcycle chase sequence featuring the great Steve McQueen. The all-star ensemble includes James Coburn, Richard Attenborough, Charles Bronson, Donald Pleasence and James Garner….can one ask for more?

A landmark in the history of movie making. A classic by Orson Welles, this is a brilliant master piece that can resonate with any generation, in my opinion. Surprisingly, it was a box office disaster initially, it generated huge acclaim eventually and continues to thrill audiences even now.

The Good, The Bad, The Ugly 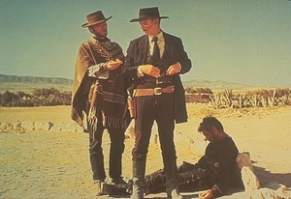 The Good The Bad The Ugly

Every time Eli Wallach said “Hey Blondie” to Clint Eastwood, I smiled. I loved both the characters…and I think I fell hopelessly in love with Clint Eastwood because of all the westerns. Movies like this and For A Few Dollars More, created a cult following for an entire generation as they depicted typical rough, tough and bold characters, most enigmatically gypsy gang lord like lifestyle and dramatic action. I lapped it all up in the true spirit of adventure. The background scores from most of the westerns are tunes I hum even today and enjoy listening to while driving…yes you guessed right…highway driving 🙂

Sound Of Music and My Fair Lady

It is unfair of me to combine both these movies…but for me they have always gone hand in hand. The lovely Julie Andrews and the suave Christopher Plummer created a different sense of romance all together. On the contrary, the beautiful Audrey Hepburn and sophisticated Rex Harrison brought such a cute, down to earth feeling to romance. In fact, one dialogue Of Rex Harrison from My Fair Lady, “Where the devil are my slippers?” always reminds me of what my man says,”My requirements in life are simple – my slippers, newspaper, my reading glasses & cuppa”. In fact when the children were growing up, these were two movies I got them to watch a few times…singing along with Maria & Eliza 🙂

Alfred Hitchcock movies did not allow me to sleep for a couple of nights at least after watching them. For a very long time after watching Psycho, I would be scared of drawing the shower curtain…those of you who have seen the movie will understand why! Hitchcock movies had this quality of making me look over my shoulder whenever I was alone. Psycho is considered a cult movie in the suspense/thriller category, with its rich, dark & enigmatic quality. I will still recommend the black & white version instead of the remakes that have come recently. A must watch…but don’t blame me if your popcorn just falls off and does not go into your mouth.

Some of the other Hitchcock movies I have thoroughly enjoyed – 39 Steps, Vertigo, North By North west, The Birds and Rear Window.

A war movie with a difference and a heart. Schindler’s List tops that category for me. Poignant, emotional and incredibly humane – the war crimes against the Jews is depicted beautifully and authentically shown by Steven Spielberg. It is not for nothing that he is called a master film maker. There are movies about the holocaust and there is Schindler’s List…that’s how powerful it is!!!

Once Upon a Time in the West

This is another epic spaghetti western movie from one of the greatest director of the genre Sergio Leone. This 1968 old Wild West tale came with wide screen cinematography of visual splendour that is so intrinsic to raw western lands and most enigmatic actors in the roles of the bandits and cowboys. This film had been a subject of huge cult following in many parts of the world where it inspired great many masterpieces of the same theme.

Butch Cassidy and the Sundance Kid

Oooh, I cannot miss this western gem for its more matured drama. It is set face to face with the modern legal proceeding with the Wild West cowboy heroes in search of a more successful criminal career, that gives the film a large tinge of thrill with other rich eclectic aspects of western movie. This 1969 western classic by George Roy Hill starring great actor Paul Newman in the lead role, won huge critical reception all over the world as one of the finest movies in the genre. And who can forget, “Raindrops keep falling on my head…”

A runaway princess meets handsome man and they fall in love…mush story most will say. Of course it is…but what a mushy romantic story. Gregory Peck became the benchmark in romance for a long time for a lot of women. Audrey Hepburn, as the lovely princess is adorable in this all time favourite of mine.

Ralph Fiennes once said, “So much of movie acting is in the lighting. And in loving the characters. I try to know them, and with that intimacy comes love.” He, of course said it from an actor’s perspective…I say it from an audience perspective. And I have loved Hugh Grant’s characters in both – Four Weddings & A Funeral and Notting Hill – the same way. British film makers showed Hollywood how to do romantic comedy in a subtle under played way…which only they can do.

There are so many movies that have left me wanting for more and I can say truly good cinema – The Great Dictator, Buena Sera Mrs Campbell, Papillon, Chinatown, The Pianist, Forrest Gump, Rain Man, Pulp Fiction, Apocalypse Now, The Graduate, Shawshank Redemption, One Flew Over The Cuckoo’s Nest, Tamarind Seed, Singing In The Rain…I can go on a little more.

The one film I have to mention in the last two decades after the phenomenal crime suspense thrillers of Hitchcock all of which had a psychological bent, this 1991 psycho thriller is the right one in every aspect of judgement. The film won Oscars in all top five categories including best picture, best director, best actor, best actress and best adapted screenplay and in considering the huge artistic and critical reception of the film all over the world. The character of Hannibal Lector, who brought new meaning to having a friend round for dinner, raised Anthony Hopkins to an iconic status and terrified a whole generation…and cntinues to do so.

Martin Scorsese says, “Cinema is a matter of what is in the frame and what is out”

Finally, a good movie can take you out of your dull funk and the hopelessness that so often goes with slipping into a theatre; a good movie can make you feel alive again, in contact, not just lost in another city. Good movies make you care, make you believe in possibilities again. If somewhere in the entertainment world someone has managed to break through with something that speaks to you, then it isn’t all corruption. The movie doesn’t have to be great; it can be stupid and empty and you can still have the joy of a good performance, or the joy in just a good line. An actor’s scowl, a small subversive gesture, a dirty remark that someone tosses off with a mock-innocent face, and the world makes a little bit of sense. Sitting there alone or painfully alone because those with you do not react as you do, you know there must be others perhaps in this very theatre or in this city, surely in other theatres in other cities, now, in the past or future, who react as you do. And because movies are the most total and encompassing art form we have, these reactions can seem the most personal and, maybe the most important, imaginable. The romance of movies is not just in those stories and those people on the screen but in the adolescent dream of meeting others who feel as you do about what you’ve seen. You do meet them, of course, and you know each other at once because you talk more about good movies than about what you did not see in bad movies.

Enjoy the cinemas and like the saying goes…the show will continue to go on!!!

8 thoughts on “The Boulevard & The Screen…Silvery Hollywood”